Growing up in Korea, I always looked forward to celebrating Korean Lunar New Year’s Day. It was the best time of the year for me. The house would be filled with relatives and guests from near and far. The kitchen would be bustling from all the cooking and chattering ladies. The tables would have spreads of delicious food, delicacies and sweets. The colorful traditional Korean clothing everyone wore brightened up the gathering spaces. Not to mention other ongoing actives like playing folk games, giving respectful bows and partaking in ancestral rituals. I didn’t quite get the ancestral ritual part, but the food I did. And one of the dishes that never missed a New Year’s Day Table was– Japchae.

Japchae can be intimidating for many, but if you break down all the components, it’s really not that complicated. I suggest following my method for your homemade japchae and you will not regret it! It’s super healthy and delicious!! If you like sweet and chewy noodles, with savory meat and crunchy vegetables, give this recipe a try!! You will love it!!

When did japchae originate?

The original Japchae traces back to 17th century, enjoyed by royal courts, which is believed to be a vegetarian dish. Japchae still remains a popular dish today, but with meat and veggies. I don’t think I appreciated it as much when I was a kid. Looking back, it’s such a nice dish that’s bright, colorful, tasty and healthy!

how is japchae related to korean lunar new year?

Korean Lunar New Years, 설날 (Seollal) is a 3-day holiday, similar to Chinese New Years. The exact date is dependent on the second new moon after the winter solstice, meaning it can take place in January or February of that year. Japchae is one of the food commonly served on Korean Lunar New Year’s Day among other delicious foods.

what else goes on seollal?

I have fond memories of New Year’s Day in Korea. As a little child, the best part that I remember the most would be all the delicious food displayed on the big table. It was called the ancestral table. My grandmother was really into this ceremony and it had to be just perfect. The best food had to be displayed, the biggest fruits and the best quality meat. Honestly I think my mom dreaded this holiday the most. But for me it was heavenly!

what kind of noodles do i need for japchae?

The type of noodles you need is called glass noodles/sweet potato noodles/vermicelli. They are made out of sweet potato starch, which also means it’s gluten free. They are quite hard in texture and need to be boiled until tender to be edible. They do store well in the pantry which is a nice thing. After you boil it until soft, it can be eaten as is, or stir fried. For this recipe, I did not stir fry the noodles but marinated with sauce only. I call this the clean and less oily method. However it needs to be eaten right away, vs the stir-fried version. The stir-fried version does last longer in fridge. Japchae made in restaurants and sold in Asian markets are typically stir-fried.

Can i substitue the ingredients?

If you plan to make traditional japchae, please refrain from substituting the noodles. For Japchae, everything should be very long and slender. Which also makes it easier to eat and pick up with chopsticks. You can certainly omit the meat to make this dish vegetarian. And use tamari sauce instead of soy sauce. 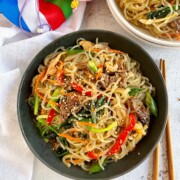 This Japchae is super healthy and delicious!! If you like sweet and chewy noodles, with savory meat and crunchy vegetables, give this recipe a try!! You will love it!!
Course: Appetizer, light meal, Main Course, Noodles
Cuisine: Korean
Servings: 6 people
Calories:
Author: Seasoned by Jin

Sauce for the noodles

This site uses Akismet to reduce spam. Learn how your comment data is processed.

Hi There! Welcome to my blog! I am Jin, the creator behind Seasonedbyjin. I am a total foodie and I love to constantly cook and create new recipes in my home kitchen based out of Northern Virginia! For delicious Korean food recipes and other fusion food ideas, please check out my website! Anyeong!